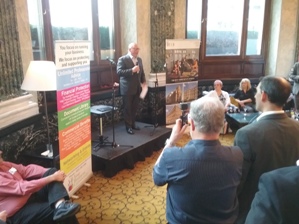 Brexit – Businesses Split On Which Way To Go

Following an extended debate at London Executive Offices flagship location, 1 Cornhill, last night, small business owners participated in a straw poll and the vote was split 50/50 between staying and leaving.

During YBC’s monthly MEGA Networking, following demand from its members, the big question was debated with the Ins represented by Clive Watson, chairman of the City Pub Company, and the Outs represented by Thomas Sharpe QC.  The debate was so intense that the attending small business owners, from a diverse range of sectors and varying in size, kept it running for an extra 30 minutes.

Topics such as employment, immigration, trade, security and regulations were covered and both speakers were given a grilling by the audience.

Following the debate, a vote was taken and the results were:

Voters were also asked if the debate had changed their opinion or position and 28% responded ‘yes‘.

The evening was supported with a Twitter chat, which can be seen using the hashtag #ybcref.

YBC’s next MEGA Networking is on June 9th – see here for more information.