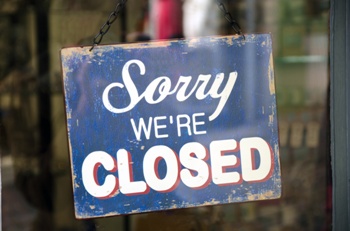 Despite the rate of high street store closures stores stalling at 16 per day in 2014,close to three times as many shops disappeared compared to 2013.

According to PwC research compiled by the Local Data Company (LDC), 5,839 outlets closed in 2014 compared to 4,852 openings. This equates to a net reduction of 987 shops as significantly fewer shops opened despite similar numbers closing year on year.

This net loss increased significantly from 371 closures in 2013, the study of multiple retailers in 500 town centres across Great Britain found. In 2013, 5,662 stores opened and 6,033 stores closed, a rate of 16 stores shutting a day.

The changing profile of town centres is clear from this analysis. 765 goods shops of a more traditional type (e.g. clothes and shoe shops) pulled down the shutters. Service retail (opticians, travel agents, hairdressers, recruitment agencies) saw a further net decline in shops from -299 units in 2013 to -457 in 2014. Leisure stores (food, beverage & entertainment) have continued to thrive albeit at a slower rate. There were an additional 233 stores of this type on the high street in 2014 compared to an extra 311 in 2013.

Charity shops, coffee shops, tobacconists/E-cigarettes, pound shops and betting shops were among those opening the most branches during 2014.

The insolvencies of Phones4U, Blockbuster, Albemarle & Bond, and La Senza were a major contributor to these figures.