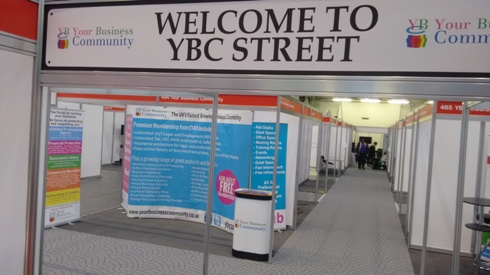 The UK economy was boosted last week as record numbers of shoppers flocked to YBC Street at the Business Show at Olympia. The organisers claimed there were some 25 thousand attendees and, at times, it seemed they were all trying to get into our unique feature of the show.

In the wider show, businesses have to take a minimum of 6 sq metres if they wish to exhibit at the event. This proves very costly and stops most SMEs from taking part. However, as YBC took such a large space, we were able to offer our premium members much smaller spaces and negotiated a substantial discount on the rate too. This saw members taking 1, 2, 3 and 4 sq metre spaces and exhibiting for as little as £350. Many visitors remarked that YBC Street was the busiest part of the show and, with the wide array of business services on offer, it was easy to see why.

After the show many of our weary exhibitors congratulated us on the success of our initiative so, buoyed by these endorsements, we have agreed to do the same thing at the next Business Show which is at Excel in May. We already have lots of repeat bookings so we are urging anyone who wishes to take part to get in touch ASAP. As well as being a boost for the UK economy YBC Street creates exposure only normally available to bigger companies